Dr. Tedd Koren revolutionized chiropractic patient education – making it scientifically referenced and distributing over 60 million pieces; he defeated the Federal Trade Commission’s attempt to destroy chiropractic doctor-patient communication; he is the only chiropractor to take on chiropractic’s arch-enemy Stephen Barrett, MD in court and he defeated him four times. His recent presentation at Thomas Jefferson University Hospital was historic. His new discovery KST is revolutionizing clinical chiropractic.
You’d think the chiropractic profession would honor him for his accomplishments. Dr. Koren has many thousands of supporters. However he was recently refused permission to speak at NorthWestern College of Chiropractic (NWHSU) last month. Apparently his discussion of chiropractic philosophy, research and the swine flu vaccine was not considered in the school’s interest and the students were not permitted to hear him.

A college spokeman wrote, “The specific content of Tedd Koren’s implied message does not appear to meet our university’s standards.”

What does that mean?

Another wrote, “President Ziegler had a special committee regarding [Koren’s] speaking on campus; they already told me that he can NOT speak about vaccines because of the H1N1 scare!”

Hmm, so only things that aren’t controversial can be discussed? Medical schools are more open to controversy.

Here are a few of the many responses from the chiropractic community, both practitioner and patient:

As a 1990 alum of NWCC, and someone who has recommended my old school to numerous prospective students, I must ell you that I am APPALLED and EMBARASSED to learn that someone there has barred Tedd Koren from speaking at NWCC.

This is an outrage. Whatever happened to letting students make their own informed choices? Dr. Koren, while I disagree with him on a number of counts, has been a stalwart proponent of chiropractic for decades, has written reams of excellent patient educational material, and has stood up to the insanity that has characterized our current “health” care system with bravery and conviction that few men could ever hope to muster.

I could write pages of outrage on your decision to ban him from your campus, but I’ll leave it at this:

Do you honestly think that your students and graduates will never hear of Dr. Koren or read his work or receive his newsletter if you “protect” them from hearing him while attending NWCC.

I strongly believe you are making a huge mistake with actions such as these. It is this kind of partisan nonsense that keeps this most sacred of professions mired in confusion, ineffectiveness, and mediocrity.

I sincerely hope that you will re-consider this decision and let Dr. Koren speak to your students some time in the future and let them THINK for themselves.

Dear Dr. Koren,
I am not a Chiropractor.  I worked as a CA for five years.  That’s how I was lucky enough to sign up for your newsletter.  But I have been a Chiropractic patient all my life.
I am SHOCKED that a Chiropractic College would not let you speak!  Totally shocked!  Not to mention disappointed, dismayed…
You are amazing.  May all the Forces of the Universe come to your aid.
You are a leader.  It’s so way impressive that you stood up to that @&*%#%$  Steven Barrett.
This world is a better place because you are here. 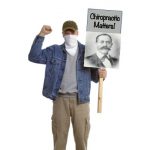 Chiropractic in the Time of COVID-19: A Missed Opportunity?