What cancer is more frightening than brain cancer?

How did it get there?

What do you do to address it?

Sen. John McCain of Arizona was diagnosed with a mass of abnormal cells growing in his brain – a brain tumor. His type of tumor, a glioblastoma, is considered the most dangerous because it is aggressive. About 12,400 Americans each year are diagnosed with it. 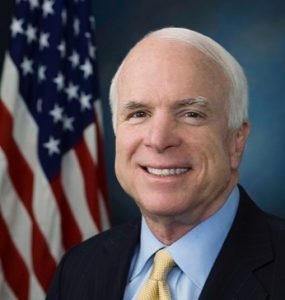 Because it is such a deadly tumor, survival after diagnosis and medical treatment is often measured in months rather than years.

Standard treatment following surgery includes a combination of chemotherapy and radiation. The five-year survival rate for people over age 55 is about 4%. Even if one responds well to initial care, the cancer can come back, often within 12 to 24 months.

“The best medical care on earth,” as the American medical profession likes to refer to itself, fails miserably when it comes to many chronic illnesses and most cancers.

The Senator’s family issued the following statement, “The Senator and his family are reviewing further treatment options with his Mayo Clinic care team. Treatment options may include a combination of chemotherapy and radiation.”

I think it is a foregone conclusion that Sen. McCain will be going the route that Kennedy, Biden and thousands of others with glioblastomas have followed: orthodox medicine, in spite of its poor success rate. Are there other options?

3 Things Senator McCain, His Family and Anyone
Diagnosed with Brain Tumors Need to Know

#1 The Tumor is a Symptom of a Deeper Problem

Something Was Wrong for a Long Time

Oncologists have no idea why people get these tumors. As Marc Chamberlain, Professor of Neurology and Director of the Brain Tumor Program at University of Washington said, “We don’t know what causes them. For all practical purposes, they tend to come out of nowhere.”

The reason why the medical profession has such a poor success rate for most cancers is that the causes are not addressed. When the causes are better understood the chances of a complete healing are greater. One thing is certain – cancers and tumors are not caused by a deficiency of chemotherapy, radiation and surgery.

Fortunately, many successful cancer researchers and healers have found and addressed the causes. This article cannot discuss them all in detail but I’d like to look at what they have in common.

The accepted definition of incurability is no longer valid. It has been outmoded by the fact that there is a third way available—whole-body therapy. There can be no justification for abandoning those millions of patients who have been given up as incurable.

Issels was emphatic that the tumor is not the problem. The tumor is a symptom of a whole-body problem. This approach is shared by many other alternative cancer treatments.

What Does This Have to Do with Sen. McCain?

McCain is a long-term survivor of malignant melanomas that were removed in 1993, 2000 and 2002. Yet his doctors classified this new cancer as a “primary tumor,” meaning it’s not related to his former malignancies. That diagnosis underlines the limitation of the medical perspective which does not look at the whole person. Instead the tumor is considered to be an isolated event arising mysteriously, “out of nowhere.”

With three earlier malignancies, it’s obvious that something was seriously wrong with the Senator’s health. Healthy people don’t get cancer and get repeated cancer. We must ask, “What was wrong with Senator McCain?”

#2 Look for the Cause

For over a century, researchers from all over the world reported that cancer is caused by toxicity. Tumor cells proliferate to store the toxins while opportunistic micro-organisms and parasites join in to dispose of the waste products. The cancer tumor is a big waste disposal party.

When the body is working properly tumors will come and go throughout one’s life. However, if a toxic body is continuously overloaded and unable to detoxify then irritation, stress and inflammation become chronic, the body weakens and the party grows out of control.

Where Do Toxins Come From?

Generally, toxins enter our lives one of two ways:

1. From our external environment (exogenous toxins) and

2. From our internal environment (endogenous toxins)

Endogenous toxins come from inside our body and are often missed by clinicians. These include toxins coming from oral infections, i.e. diseased or dead (root canalled) teeth, cavitations or other dental issues, tonsil infections and an unhealthy gut (imbalanced intestinal flora).

The cause leads to the cure – where there is too much (toxicity) – we need to remove the toxins and eliminate them from the body (detoxification). Where there is too little – a lack of ability to detox – we need to nourish, strengthen, de-stress and rebalance our body so it may function closer to its ideal to restore itself to health.

I would advise McCain and his caregivers to immediately do the following.

1. Get Rid of All Forms of Toxicity There are few things in life that are one cause-one cure. Disease is almost always multifactorial, due to a number of contributing causes.

As mentioned above, some of the most intense and common forms of toxicity related to cancer and chronic illness come from inside the body (they are endogenous). Among the most toxic are oral infections and dead teeth (root canals) and dead areas in the jaw (cavitations). These sources of toxicity need to be immediately addressed by a holistic/biological dentist. (By the way, Sen. McCain, being from Arizona, is in luck because I know a great dentist in that state.)

Serious stress/damage/toxicity that originates from outside the body (exogenous) include heavy metals and chemicals such as mercury, lead, aluminum and arsenic from that are in many vaccines. Since Sen. McCain was in the military I assume he was extensively vaccinated.

Sen. McCain, along with Ted Kennedy, was often on his cell phone. Cell phones are being increasingly criticized as causes of brain cancer. In addition to everything else, anyone with brain cancer must stop irradiating their brain. Using the speaker function or good radiation blocking ear plugs are necessary for everyone.

Lafrance A. Do cellphones cause brain cancer or not? Senator John McCain’s glioblastoma diagnosis revives a longstanding debate over the safety of wireless technology. The Atlantic. July 20, 2017. Like so many Americans, Sen. McCain may have consumed diet sodas and other products containing the artificial sweetener aspartame (sold commercially as NutraSweet® or Equal®). While undergoing safety tests, researchers had numerous questions about aspartame’s link to brain tumors. Yet in spite of research questioning its safety, the Food and Drug Administration (FDA) approved aspartame for public use, in foods, drinks and other products. Within a year of aspartame’s approval there was a dramatic increase in glioblastomas in the US.

More recent research continues to link aspartame to brain tumors. A metabolite of aspartame, diketopiperazine, has been considered the chemical that contributes to the formation of glioblastomas, medulloblastomas and meningiomas.

In addition, cancer tumor cells attract various micro-organisms and parasites that need to be addressed. I recommend Sen. McCain and anyone else with brain tumors be tested for toxins and parasites. A detoxification and parasitic cleanse program under the guidance of a specialist in this area is essential.

The long-term use of prescription and OTC (over-the-counter) drugs prevent the body from performing natural detoxification. Drugs, creams, fever reducers such as aspirin and Tylenol® (acetaminophen) that prevent symptoms from being expressed naturally and running their course can lead to chronic disease. There are many recorded cases of cancers of every kind disappearing after the body goes through expressive detoxification including high fever. This is referred to as the phenomenon of spontaneous remission.

A wonderful paper discussing this phenomenon of spontaneous remission was co-authored by the former head of the National Institutes of Health, Office of Alternative and Complimentary Therapies, Wayne Jonas, MD: Fever, Cancer Incidence and Spontaneous Remissions.

Healers Sen. McCain should consult that promote expressive healing include homeopaths, traditional chiropractors, naturopaths, acupuncturists and other natural healthcare providers who work at removing blockages and improving your body’s ability to function closer to its potential. (I know some good ones in Arizona too.)

Tylenol® (acetaminophen) and other medications deplete the body of glutathione, a powerful cell-protector, youth-defender and disease-preventer that’s been dubbed the “master” antioxidant. Glutathione is necessary for the health of the blood brain barrier and for detoxification of heavy metals.

What Is the Blood Brain Barrier (BBB)?

Your brain, as with any other part of your body, is fed nutrients via the blood. The only place where nutrients and wastes pass through your blood vessels to your tissues is when the vessels narrow to only a single cell in width. These narrow vessels are called capillaries. You have about 10 billion capillaries in your brain – one for every nerve cell. But in your brain your capillaries are a little different than they are anywhere else in your body. In your brain, they are surrounded by an extra layer of cells designed to only let certain sized products in or out. That extra layer creates what is called the BBB.

Glutathione is necessary to maintain the health of the BBB.

Tylenol® (acetaminophen) also damages your main organ of detoxification, the liver, and is the number one cause of acute liver failure in the US. The only treatment for an acetaminophen overdose is a glutathione injection. Chronically-lowered glutathione levels can cause “leaky brain syndrome.” Bad chemicals and micro-organisms can get in and necessary chemicals can leak out.

But a bad one-two punch is a person given a vaccine (either a childhood vaccine but in Senator McCain’s case a flu or pneumonia shot, etc.) who takes Tylenol® either before or after administration. Because acetaminophen makes the brain more vulnerable to the toxins in the vaccine, the patient is playing with fire.

A perfect storm would be Sen. McCain swallowing Tylenol® and washing it down with diet soda sweetened with Nutrasweet® or Equal® after receiving a flu shot, while on his cell phone to make an appointment with his dentist regarding an oral infection. Here we would have the Tylenol® damaging his blood brain barrier (opening his brain to aspartame, vaccine ingredients, other toxins and radiation) while at the same time he would be weakening his liver that is a major organ of detoxification. To add insult to injury, the Tylenol® would prevent his body from raising the fever necessary to fight infections and cancer.

This perfect storm, in whole or in part, is not an unusual event for many people. Would their medical provider ever ask them if they used these products? Sadly, the answer is that most MDs have no idea that these are brain tumor risks. Instead they will continue to claim that cancers and tumors come from “out of nowhere.”

Senator McCain – our thoughts and prayers are with you and your family. I urge you to explore outside the medical model in your search for a complete healing. There are many details in this short article that need to be addressed and I am available to speak with anyone in your circle.

Special Thanks. This paper could not have been written without the assistance of Lichuan Chen, Ph.D. Dr. Chen’s background in cancer, toxicology and natural healing practices has helped me, and many others, understand the genesis of cancer and many other chronic illnesses and natural, inexpensive and safe approaches to cures. And thank you to Jim Turner, Esq. who reviewed the paper and reminded me of the link between aspartame and glioblastomas.