I had just opened my first office on a shoe string and was having my starvation period. I lectured to everyone, gave out cards on the street, advertised as much as I could afford and ever so slowly my practice began to grow. At this point, mental health wasn’t on my mind.

I was able to avoid a real starvation period when the local pizza guy became a patient and we traded services.

One day Greg became a patient. He was an orderly in a local psychiatric, mental health hospital. 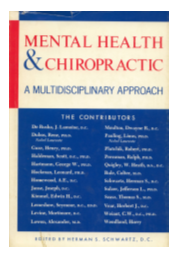 “I work with a lot of disturbed people,” Greg told me, adding, “the inmates could be difficult too.” It was his standard joke. At least I hoped it was a joke.

Every few days he’d come in for a visit, scratched and banged up from restraining violent patients. Usually he won, but not every time. “I didn’t see that left hook coming, Doc. Wow, she was strong.”

Greg loved the philosophy of chiropractic and understood chiropractic care was much more than a pain treatment. He referred a lot of his friends in for care.

One evening Greg brought in a tall, thin kid with brown hair, about 20 years old.

“Hey, Doc, this is Jeff. He’s an inmate at the hospital. He’s diagnosed as a paranoid schizophrenic and hears voices. But he’s not violent. He’s on lots of meds. Jeff and I have bonded and the psychiatrists asked me if I’d take him out for a drive. I’ve done it many times before. Would you like to work on Jeff?”

Serves me right for telling Greg about the Clear View and Forest Park Chiropractic Sanitaria in Davenport, Iowa. These were chiropractic mental institutions. They had better reported success rates and lower recidivism than the state mental hospitals that used shock therapy and other bizarre treatments. 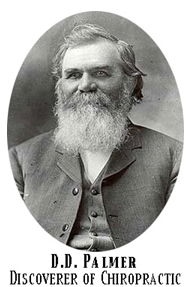 DD Palmer, the discoverer of chiropractic observed: “Chiropractors correct abnormalities of the intellect as well as those of the body…. Many a child has been injured at birth by a vertebral displacement … the result of this excessive tension is physical or mental disability which may be lifelong.”

I’m sure the psychiatrists at the hospital didn’t know about Clear View and Forest Park and I doubt if an MD there said to Greg, “Hey, while you are driving around with Jeff, would you find a local chiropractor? Maybe a subluxation is causing some of his mental issues.”

From a legal perspective, we had no perspective. Greg had no permission or authority to bring Jeff to my office. Similarly, Jeff couldn’t give permission for me to work on him since he was certified crazy, or at the least incompetent. I could lose my license for even touching him.

Jeff was very wary about all this. You might say he was a bit paranoid. Greg and I placed him on his side on a side posture table that was designed for upper cervical work.

“I’ll never get another opportunity to adjust him,” I thought.

Suddenly, without my conscious awareness, my elbows snapped together, my pisiform bone pushed down against his upper neck and the drop headpiece dropped down and stopped suddenly.

“Uhm, uhm, I uh, gave you an upper cervical adjustment,” I said. It was not my finest lay lecture. As an afterthought I added, “Your atlas was subluxated.”

“It felt as if you took a sword and ran it through my neck,” he yelled. 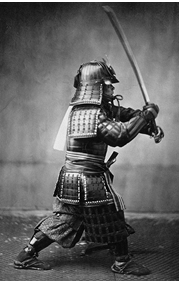 As he said that I pictured him repeating those words to a dozen people on a jury. I began to sweat; my heart began to pound. I looked up at Greg, for help. He walked over to Jeff, put his arm over his shoulder and laughed.

“Don’t worry about it, he does that to me all the time. Let’s go out for a pizza.” They drove off.

“Oh, I meant to call you. He’s off all his meds. He stopped hearing voices. The psychiatrists are convinced the drugs finally began to work. He’s like a different person.”

The next week I asked again. “Jeff’s being discharged. His parents are coming in tomorrow to pick him up and bring him home.”

“No, he’s fine. Oh, wait, there’s just one thing his MDs are concerned about.”

“He keeps telling everyone he wants to be a chiropractor.”