My mentor, Dr. Lowell Ward, discovered that it was possible to accurately “read” a personality by analyzing a person’s posture.

For example, a person with their head in front of their center of gravity line was typical of a hard-driving “type A” driven, aggressive personality.

A person with their head behind their center of gravity was a withdrawn, defensive, fearful personality. The distance the spine was displaced would reflect the intensity of the various emotional states the person was experiencing.

That posture is related to personality is nothing new. Irvin Korr, Ph.D. wrote of this:

Biomechanical dysfunction … [is an] eloquent expression of the patient’s total personality and view of the world and of self. It is no semantic accident that ‘posture’ and ‘attitude’ apply to both the physical and psychological domains. (1)

Dr. Ward’s breakthrough was realizing that posture-personality relationships could be measured.

Among Dr. Ward’s posture-personality correlations is the “intellectual honesty angle.” Where is it? At T1. The T1 angle was determined by drawing a line across the top of the body of T1 and drawing a line perpendicular to the patient’s center of gravity line. That intersection was the T1 angle.

An angle of 25° was considered ideal. People with a 25° T1 angle were open and honest and truthful. I found that correlation in my clinical practice. People with an ideal T1 honesty angle of 25° were open to all the personality correlations we discussed and if I recommended exploring their stresses with a psychologist they wanted to do so. It was a pleasure working with them.

On contrast, an angle less than 25° reflected a person in denial—refusing to acknowledge his own reality or acknowledge their personal issues. A person with an angle that was much less than 25° would scoff, saying to me something like, “I don’t have any problems.” I remember one who said to me, “Do you really believe this stuff that you are doing?” Don’t even think of suggesting therapy.

An angle above 25° reflected a person in various degrees of fantasy. A T1 angle above 50° denoted psychosis—the person was in his own world, not interacting with reality. A person with an angle more than 25° would say something like, “I’m ok, I’m dealing with my problems” (they weren’t and if the angle was very high they acted as if they didn’t hear a word I said).

My success doing Dr. Ward’s work inspired me to do an independent research project that was published in the International Journal of Psychosomatics.* 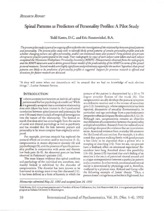 I researched Spinal Column Stressology’s** emotional profiling using psychological testing. Working with a research psychologist and a statistician the result was my first paper in a peer-reviewed bio-medically indexed journal.

Standing, but not sitting, X-rays were found to correlate with various personality traits as measured by the Minnesota Multiphasic Personality Inventory (MMPI), an in-depth psychological test.

A psychologist advisor suggested I seek out Alexander Lowen, MD who was a specialist in posture and psychological states. I called him and he graciously agreed to meet with me one cold winter morning in Manhattan.

My lunch with Lowen

Alexander Lowen, LLB, JSD, MD was a student of the world-famous and controversial psychiatrist Wilhelm Reich, MD. Reich was a student of Sigmund Freud but they parted company over professional disagreements. In the face of the growing Nazi threat, they left Germany for England and the US respectively.

Reich’s work on character analysis, body energy, muscular armoring and emotional health inspired Dr. Lowen to develop Bioenergetic Analysis. Lowen authored 14 books on the subject and founded the International Institute for Bioenergetic Analysis (IIBA) in New York City. The IIBA has over 1,500 members and 54 training institutes worldwide. Bioenergetic Analysis is now practiced in the United States, Canada, Europe and many other countries.

I met Dr. Lowen in his midtown Manhattan office. We walked to a local coffee shop. I asked for a seat at the window which I promptly covered over with 14”x36” X-rays and described the various markings and emotional correlations. This being Manhattan no one acted as if this behavior was unusual.

“That is a correct observation,” he said, “the explanation is obvious.”

The patients were accessing their conscious mind while filling out the questionnaire. So that’s why the MMPI findings correlated with the standing films in my research paper.

I had no idea where this exploration of posture, physical health, personality and emotions would lead me. But a few years later, I was in an accident and in searching for healing discovered Koren Specific Technique.

A cornerstone of KST patient care (and self-care) is that the best way to locate the blockage in a patient is to place them in the posture of stress or subluxation (POS).

As Dr. Ward first discovered, subluxations are sneaky things. They come and go as we change our posture. As we stand, sit, turn, walk, run, move, hit a tennis ball, swing a golf club and engage in a multitude of activities subluxations come and go. Therefore by limiting patient care to the prone posture—lying face down on a table—the practitioner was limiting his/her ability to locate, and then correct, a patient’s subluxations.

Drs. Ward and Lowen CORRECTLY observed that a patient is different in both standing and sitting postures. Different parts of their brain are accessed. Due to the posture-personality relationship, for complete care, a patient needs to be analyzed and corrected in different postures.

Correcting in the POS (Posture of Subluxation)

By working on the subluxations that appear in a person’s physical body as they relive emotional stress we can interfere with an adverse body-mind pattern or reflex. The adjustment or correction in that state is a pattern interrupt. The memory might still be there but we won’t somaticize it, it won’t affect us physically. As a result of adjusting or correcting “emotional subluxations” trapped energy is released, permitting more complete healing.

A movie not a snapshot

The POS tells us that patients should be constantly re-analyzed and re-corrected after every adjustment or correction. Why? Because the body changes after each intervention.

X-rays, MRI, CT scans and blood work are like snapshots—a one-time picture of the patient at that moment in time and in that physical/emotional posture.

KST care, on the other hand, is like a movie. As the patient is constantly checked and corrected in different postures they unwind and reveal different, deeper, blockages. The practitioner follows what the body wants corrected.

Since it isn’t practical to re-X-ray, MRI, CT scan after every correction, KST practitioners use body bio-feedback. We “ask” the body over and over to see what the newly-corrected body needs NOW.

As we have learned the POS may be physical or emotional and blockages need to be addressed in that posture.

The result is more complete correction than otherwise possible.

Tedd Koren, DC discovered Koren Specific Technique, a breakthrough in healthcare, after dozens of doctors were unable to help him. For more information on KST or to register for an upcoming seminar, go to www.korenspecifictechnique.com or call 267-498-0071 (US East coast).