It was in the late 40’s when my mother and grandmother first met Dr. Friedland, Doctor of Chiropractic. They were shopping in a department store in Brooklyn. Suddenly my mother stopped, unable to move. A massive headache came out of nowhere. Her eyes were closed, she couldn’t move, wracked in pain.

“My daughter needs help,” Grandma pleaded with a saleslady. “Is there a doctor somewhere nearby?”

“There’s one upstairs, he has an office just above. You need to go out of the store and make a right and you’ll see his entrance. It’s on the second floor.”

Grandma guided my mother outside and up the stairs to his office.

Soon my mother’s headache was gone. Dr. Friedland became our family chiropractor. His chiropractic office was just a few blocks away from our home. He also made house calls I was to discover later.

I was nine years old when I got sick. I don’t remember much about it, other than I refused to just stay in the house. Hey, it was summertime and we were living in our summer home in the wilds of northern New Jersey. There were lots of forest and lakes just outside our door. I spent my days in camp, and spend time exploring trails with my friends and dog, swimming in the local pool and in an old creek discovered deep in the woods, playing ball and fishing. Now I was stuck in bed.

The doctor was concerned. “He’s got walking pneumonia,” my parents were told. “He needs to convalesce.”

I didn’t know what walking pneumonia was. Was there also a hopping, skipping and jumping pneumonia?

Anyway, I was driven home to Brooklyn to remain under the watchful eye of my grandmother. I remember sitting in the back of the car eating rock candy, crystallized sugar. Why that was considered a medicine? Were they trying to kill me? I don’t know.

It seemed so wrong to be in the city in the summertime. But what could I do? I was just a kid.

I liked staying with my grandmother. She was very tall, at least five feet. Well, tall to me. And built strong. She worked her whole life and taught herself carpentry, plumbing, wiring and was a great cook too. She also drove a truck. Those days few women even drove cars.

She called Dr. Iserson, the pediatrician, to come over. All the doctors made house calls those days. He took out a cold stethoscope. Why don’t they warm those things up first? He listened to my lungs, asked me to cough and all that. He decided I had pneumonia.

Then he did something I don’t understand to this day. He decided I needed a shot. Of what? I still don’t know. He and my grandmother held me down in my bed; I was kicking and screaming. He gave the injection. I cried from the pain. I hated those things.

Two days later he came by again, listened to my chest and decided I needed another shot. We went through the same routine: me struggling face down in bed as an exasperated grandmother and MD held me down for another injection. This time something went wrong. That was no ordinary shot, he hit something.

The pain was intense and I started crying. This wasn’t my regular cry, it was deeper and lasted longer.

I stayed in bed a while and when I got out to stand I fell to the floor. Something wasn’t right. Since I couldn’t walk I got through our small apartment by grabbing a dresser, a chair, anything to support me. I remember saying, “I’m walking like Bubbe (my great grandmother),” to my grandma.

Even when I was sitting or lying down there was a sharp internal pain. When I moved, my leg couldn’t hold my weight, it had to be dragged along. I think the doctor struck a nerve (literally).

He came back two days later. As usual, he arrived very early, before his office hours and woke me up. He was smiling and preparing another shot. This time my grandma ran interference.

“Teddy, walk for the doctor,” she said.

I got out of bed and fell to the floor. I grabbed hold of furniture and pulled myself up. There was silence.

“What did you do to my grandchild?” More silence.

Grandma asked again, raising her voice, “WHAT DID YOU DO TO MY GRANDCHILD”?

Dr. Iserson stood dumbstruck. My grandmother grabbed him by his neck, dragged him across our apartment and pushed him out the door yelling, “Get out of here, get out of here.”

Chiropractic to the rescue! 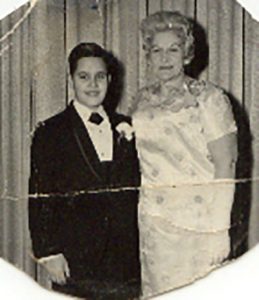 Call it grandmother’s intuition; I don’t know why she did this but she called Dr. Friedland. He came over a little later.

It was the first time I remember seeing him. My mother later told me that when I was a toddler she took me along with her to his chiropractic office. I was running all over his place, laughing and wriggling in his grasp and as he attempted to pick me up he threw his back out. “He had to go see his chiropractor,” my mother laughed.

He smiled as he came into my bedroom. I guess bygones were bygones. When he left my grandma asked me how I felt. “Much better,” I told her. I was able to walk, on two legs.

He came by a couple of days later. When he left my pneumonia was gone. I could take a deep breath, no problem! I was driven back to the wilds of New Jersey to do more damage.

Koren Specific Technique was discovered in 2003 by Dr. Tedd Koren when he relied on the vitalistic philosophy underpinning chiropractic to find healing for himself following an accident.