Actor Luke Perry, 52, died after a massive stroke, on March 4, 2019. He was a star in the shows Beverly Hills 90210 and Riverdale and left behind a grieving family and many saddened fans. Why would such a relatively young person have a deadly stroke? Were there any warning signs? Could it have been prevented? 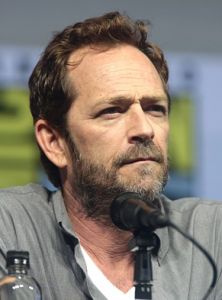 What is a stroke?

A stroke, also called a cerebral vascular accident (CVA), occurs when a blood vessel in the brain is blocked or bleeds. The brain tissues affected, deprived of oxygen and nutrients, can die – there is brain damage. Strokes come suddenly – a person stops speaking, loses control of his limbs, even drops to the ground. To the ancients, it seemed as if a person were struck by an invisible god. Stroke was originally called “apoplexy,” a Greek word meaning “struck down.”

Strokes and other neurological conditions such as multiple sclerosis (MS), Parkinson’s Disease (PD) and ALS (Lou Gehrig’s disease) seem to occur randomly. A person may appear perfectly healthy and be struck done as if out of the blue. As an example, look at this headline from the Journal of the American Medical Association:

A healthy 46-year old man has a stroke? He couldn’t have been healthy – something was obviously wrong; something hidden was missed. Therefore, calling him healthy is an untruth.

But it is true that strokes and other neurological disorders are occurring more and more in young, apparently healthy people. The National Stroke Association reports a 44% increase in young adults hospitalized for stroke in the past decade. Mitchell S.V. Elkind, MD, chair of the American Stroke Association Advisory Committee says, “There is evidence that stroke rates among young people are increasing….”
https://www.stroke.org/understand-stroke/impact-of-stroke/young-stroke-survivors/
https://www.marketwatch.com/story/luke-perrys-fatal-stroke-is-a-warning-for-younger-adults-2019-03-05

An internet search turns up many heart-wrenching stories. Here are just a couple:

Cheryl Murphy, 31, thought strokes happened only to grannies. Then one afternoon, she found herself unable to see clearly, read, or ask for help.
https://www.cosmopolitan.com/health-fitness/advice/a4439/too-young-for-a-stroke/

Stroke at Age 26: One More Reason to Act Fast
https://www.everydayhealth.com/columns/reena-pande-healthy-hearts-strong-women/124/

Risk factors associated with stroke include smoking, high blood pressure, diabetes, high cholesterol, obesity, heavy alcohol and drug use, obstructive sleep apnea, cardiovascular disease and family history. But that doesn’t explain why stroke is increasing in young people and ignores the fact that people without any of those risk factors get strokes.

That is because the most severe causes of stroke are usually ignored: dental infections and heavy metals poisoning.

Dental infections are a silent, painless, killer associated with stroke, neurological diseases, heart disease cancer and other chronic illnesses even after other risk factors have been taken into account. Let’s explore what we mean by dental infections.

Areas of decayed, infected, abscessed, and/or gangrenous bone tissue often found around a root-canaled or extracted tooth are called cavitations. Cavitations are dead areas; think of dry rot. In addition to dental procedures, it can be caused by trauma, such as getting struck in the face but the most common causes of cavitation are dental procedures, especially wisdom tooth extractions.

It’s common dental practice but when a wisdom tooth is extracted, dentists usually do not clean out the tooth socket properly and the site may become a breeding ground for bacteria that can then impact the surrounding bone as well as the rest of the body.

Because the socket heals over, no oxygen can get to it and the most deadly, powerful anaerobic (non-oxygen using) bacteria develop and release toxins. Examples of anaerobic toxins are botulism and tetanus – anaerobic toxins are 1,000 times more powerful that regular (aerobic) bacterial toxins. Twenty to 30 different species of bacteria can infect the bony socket of the tooth and jaw bone.

These toxins may seep into the lymphatic system and travel all over the body and target specific parts. Over time, years or even decades, serious health problems, including stroke may “suddenly” appear:

Poor oral health…was more common in the patients with cerebral infarction [stroke] than in individuals of the control group…several dental and oral conditions were significantly associated with the diagnosis of a cerebral vascular accident.
Loesche WJ, Lopatin DE. Interactions between periodontal disease, medical diseases and immunity in the older individual. Periodontol 2000. 1998;16:80-105.

Another source of cavitations is root canaled teeth. The root canal procedure creates dead teeth, called “the corpse in the attic” by holistic/biological dentists. They become foul with anaerobic toxins that seep into the body.

Among the most dangerous infections are those from root canals. are also a factor in risk of stroke and heart disease. The role of gum disease and tooth decay as a contributing factor to stroke cannot be denied.
Li X, Koltvelt KM, Oslen I. Systemic diseases caused by oral infection. Clinical Microbiology Reviews. 2000 Oct;13(4):547-558. 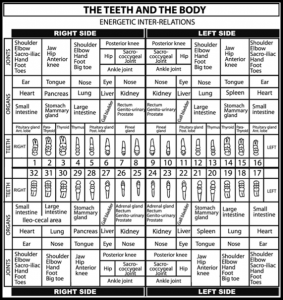 In addition to the chart here, there are many dental-organ charts available and the reader is invited to see all the many types (some in color and more greatly detailed) by doing a simple internet search.

Dental amalgams are sometimes called silver fillings but they have much more mercury than silver. They should more accurately be called mercury fillings. Amalgams are not stable and outgas for decades as we continue to inhale this neurotoxic (nerve-damaging) heavy metal. Mercury toxicity affects many organs, including the brain.

Mercury has been found to accumulate in the pineal gland and reduce melatonin levels…Melatonin is documented to be effective at prevention of stroke and cardiovascular damage, as well as seizures and other neurological damage…

When I think of the relationship between mercury fillings and stroke I’ll never forget the time I and other KST students saw patients at a rehabilitation center in Haifa, Israel. Among the patients was a woman in her forties. She had been an architect, and was married with four children but was now nearly completely disabled after a massive stroke. Using KST procedures I “asked” her body what caused her stroke. Dental toxicity came up. Mercury toxicity.

I told the MD, who was in charge of the center and overseeing our visit, what I found.

“Impossible,” he said to me. “We don’t use mercury fillings in Israel.”

I checked again and told him, “I’m sorry, I get dental mercury again.”

“I’m telling you, it’s not possible, we don’t use mercury in this country,” he said.

“Why don’t we look in her mouth?” I suggested.

He asked her to open her mouth; what we saw was shocking. Many of her teeth were filled with poorly placed mercury (amalgam) fillings.

“They didn’t use mercury in Israel?” I asked.

He asked her a question in Hebrew. She answered. “Bulgaria,” he said. “She is originally from Bulgaria and that’s where they were done.”

“Now you know why she had a stroke,” I said.

I wondered if her MD wrote a paper, “Stroke in a healthy 40-year-old Israeli woman?”

What do you do if you have dental issues?

If you have any of the above dental conditions you are at greater risk for a stroke. Find a biological/holistic dentist at www.iaomt.org to remove your mercury, pull your root canals (replace with an implant or removable denture) and clean out your cavitations. The dentists who do this kind of non-toxic work are life-savers.

May is Stroke Awareness Month 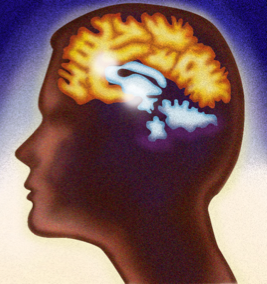 It’s true, but big deal. May is Stroke Awareness Month but such awareness means nothing if the deepest causes of stroke are ignored.

What should you do?

Did Mr. Perry have his wisdom teeth removed? Did he have root canals or other dental issues? We may never know. But wisdom teeth removal and root canals are commonplace – there are many corpses in many attics. A Hollywood smile doesn’t come cheap; many people are paying a terrible price for pretty teeth. The Root Canal Coverup was written by George Meinig, DDS, a Hollywood dentist who was a founding member of the American Association of Endodontists. His book is an apology for all the root canals he performed on some of Hollywood’s top stars – it is well worth reading.

Mr. Perry did give us some clues – there was obvious toxicity in his body. He had pre-cancerous growths removed from his colon in 2015 and he had back surgery the year before his fatal stroke.
https://country1037fm.com/2019/03/05/the-health-problems-luke-perry-had-before-his-stroke/

Nothing happens in a vacuum – these are warnings.

Of course, it’s too late for Mr. Perry, but may his death serve as a warning and remind us about the causes of stroke that are nearly always missed.

If he had been my patient …

If he were my patient I would have used a special form of analysis known as binary biofeedback to “ask” his body what he needs. I developed KST (Koren Specific Technique) to do just that.

DD Palmer, the discoverer of chiropractic, described three causes of body malfunction (dis-ease): toxins, thoughts and trauma. All three need to be explored. Whenever there is a stroke a dental issue must be considered.

The first thing that needs to be done

As I would with all patients with stroke, cancer and chronic illness, using KST procedures, I would have checked Mr. Perry for dental issues and other forms of toxicity. If there were teeth and/or cavitations that were putting his health in danger I would refer him to a holistic/biological dentist. At the top of the list would be addressing root canals, cavitations and other infections as well as proper removal of mercury.

Mr. Perry obviously had structural stress. Therefore, his entire structural system including the cranium, spine, pelvis, discs and sternum would need to be addressed for subluxations, blockages and interference that could affect his every muscle, organ and gland, including the blood vessels in his brain.

Whenever there’s toxicity, there need to be dietary adjustments that promote detoxification, nourishment and regeneration to cool the inflammation and cleanse.

And what about thoughts – emotional healing? There are many mind/body systems that are able to locate emotional stresses that are interfering with proper function.

It’s too late for Luke Perry, but not for the millions of people who are at great risk for stroke and chronic illness – they can be helped before disaster strikes. Don’t wait to be struck down without warning. No one needs to be a victim. Locate a healer that can address intense toxins, trauma and emotional stress now, before the body is overwhelmed.