Coronavirus: We Should Have Learned by Now

And late-breaking coronavirus news (as of March 31st)

The dust hasn’t settled yet. My prediction is that they have preferentially tested sick people, who likely would have died from their existing health conditions. Since it’s always in the population, people die with coronavirus rather than from coronavirus. But it’s reported that the virus killed them. Until we look at background death rates, we have no way of knowing if there’s an increased mortality or not.

Case-fatality rates for respiratory virus infections are highly uncertain. Many mild infections pass unnoticed, and if an elderly frail patient with serious heart disease is pushed over the edge by an infection, was it then a virus death or a cardiac death?

I have suspected for a long time that we are the victims of mass panic. Two days ago, I read in a newspaper that the average age of those who died after coronavirus infection was 81 and that they also often had comorbidity.

What if the Chinese had not tested their patients for coronavirus or there had not been any test? Would we have carried on with our lives, without restrictions, not worrying about some deaths here and there among old people, which we see every winter? I think so. (2)

We should have learned our lesson in 1976

It began with one lone soldier. It was very cold the night of February 4th, 1976 at Fort Dix in New Jersey. A recruit, sick with a fever, insisted on going on a 50-mile forced march with full pack in the snow. Not a good idea. We’ll never know what he was thinking because in the middle of the march he collapsed and later died of pneumonia.

A week later, F. David Matthews, US Secretary of Health, Education and Welfare, said the soldier died of swine flu and it’ll spread: “We will see a return of the 1918 flu virus that is the most virulent form of the flu. In 1918 a half million Americans died. The projections are that this virus will kill one million Americans in 1976.” (3) 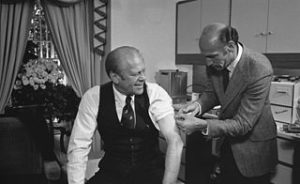 A half million deaths? The media claimed that we needed a vaccine now! President Ford was publicly vaccinated in the White House to show everyone how important it was.

On March 24, the day after he lost the North Carolina primary to Ronald Reagan, President Gerald Ford welcomed the top virologists in the nation to a meeting in the White House and asked them if the nation was facing a swine flu epidemic. Would mass vaccinations be necessary? The doctors all said yes. (4) 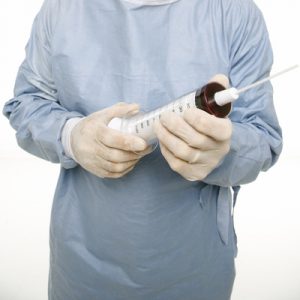 Which doctors said yes? Big shots! A “blue-ribbon” committee of experts including Jonas Salk and Albert Sabin. Some scientists said the swine flu had a 60-year mutation cycle and the soldier’s death was the start of a new, incredibly lethal type of flu. (5)

Merck and other drug companies hesitated to go ahead with the vaccine unless the US government would accept liability. Millions of Americans were vaccinated before the number of deaths and injuries brought the vaccination program to a halt. One more thing: there was no swine flu epidemic. What about all those experts?

Well, maybe not ALL the experts

J. Anthony Morris, PhD, a flu expert and researcher at the FDA’s Bureau of Biologics, refused to join the herd. He thought the flu vaccine was dangerous and ineffective. So he went out publicly with those remarks saying the vaccine was not safe or even necessary. “He was fired on trumped-up charges as a result of his position on the flu vaccine. (One of the charges was that he was late returning his library books!) That served as a warning to all government scientists and employees not to put science ahead of politics,” according to his attorney Jim Turner. (6)

When the dust settled, not a single person died from the swine flu “pandemic,” but 25 died from the swine flu vaccine. Over 500 were paralyzed with Guillain-Barre Syndrome (GBS) also known as ‘French Polio’. At least 3,905 claims were filed alleging other vaccine-induced injuries. Instead of being lauded for his scientific acumen, Dr. Morris had to take legal action to get his job back.

The vaccine makers were smart by refusing to manufacture the vaccine. The US government had to shell out about $4 billion to people who were injured.

Gerald Ford’s attempt to gain credit for keeping America safe was busted. He lost the presidential election to Jimmy Carter that November. The 1976 to 1977 flu season was the most flu-free since records had been kept; a condition that was apparently unrelated to the vaccination program. The Great Swine Flu Epidemic of 1976 never took place. (7)

Did anyone lose their job at the CDC or HEW for being so royally wrong and for creating a panic that led to paralyses, deaths and $billions in liability? No one! Well, Ford lost the election to Jimmy Carter—so some may argue that the entire country lost in the end.

In 2009 we were told there would be a swine flu pandemic—the big one is coming! Homeland Security Secretary Janet Napolitano suggested a mass immunization program for the then-current outbreak of swine flu. Didn’t she learn anything from history? Despite her suggestion, no vaccine was produced.

What the hell, let’s add Y2K. It wasn’t a germ but it was predicted civilization would come to near-collapse. People did get nervous.

Chiropractic care and the immune system

Believe it or not, some chiropractic organizations have threatened DCs for daring to claim that chiropractic helps the immune system. Matt McCoy, DC, MPH has collected great material on this subject. Share it with your patients (and chiropractic boards and colleges):

About coronavirus: in conclusion

As reported earlier, we really don’t know what’s going on until the dust settles and the researchers, statisticians, infectious disease experts and others count the numbers and compare everything to seasonal flu. Is there excess mortality?

As I reported in my recent posts Corona Virus: Going, Going, Gone! and Corona Fiasco: Can We All Go Out and Play Now? as well as in this one many experts are rolling their eyes at the hysterical response that has gripped the media, politicians and the general public.

Bacteria and viri only exist in a toxic body and serve a purpose—to feed on and to eliminate toxins. In order to protect oneself from the flu and any disease, keep your body free of subluxations in order to promote improved body function, improved detoxification and elimination of wastes.

Natural healers all over the world for thousands of years have promoted this safe, natural and gentle approach. Why? Because it works.

Dr. Koren has been following the coronavirus question. He has shared his findings and thoughts in several posts.